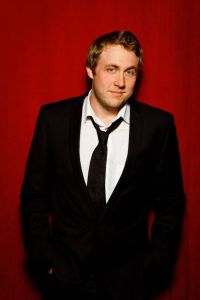 Edinburgh Festival is fast approaching, and as the line ups, headliners and most anticipated new acts are announced, I thought I’d get in on the action. After last year’s Fringe, I only managed to squeeze in 67 shows, but I did see some cracking comedians that are bound to make an even bigger and better mark this year. Over the next couple of months, in the lead up to this year’s Edinburgh Fringe, I will be talking to some of our favourite people from last year’s Festival, and to a heap of new upcoming stars we reckon you should keep your eyes on.

This week I caught up with Tom Toal, one of comedy’s rising stars who has spent last year performing in all the major clubs up and down the country to rapt audiences and rave reviews. I gave him five stars for his show in 2012 (double headliner with Ian Smith) and this year he is back again as part of a new show ‘The Comedy Reserve’.

“The T-Dog is certainly one of the most promising of today’s emerging comics.” – Steve Bennett, Chortle

SF: So Tom, tell us a bit about your Edinburgh Festival Show…
TT: The show is called The Comedy Reserve, and it is on at the Pleasance Dome at 9.30pm every night. It is an extremely lovely show to be a part of because it’s a showcase of up and coming stand ups. The alumni reads like a who’s who in comedy; Jack Whitehall, Joe Lycett, and Jared Hardy have all done it before.

SF: How many times have you played the festival now?
TT: This is my fourth time at the festival.

SF: What is your favourite thing about the Edinburgh festival?
TT: The sheer number of incredible shows that are a stone’s throw away from you at any time or place within the month, and the wealth of talent at your disposal to go and watch are really amazing.

SF: Have you gigged in Edinburgh before outside of the festival? If so, what’s your favourite venue?
TT: I have been to the Edinburgh Stand a couple of times outside the festival, and quite simply it’s an incredible venue to do stand-up comedy in, one of the best in Britain.

SF: If you could recommend five other comedians at the Fringe, who would they be?
TT: Ian Smith (I live with him) – he has put his all into this show, and I know it will be incredible; Matt Richardson – in the past I’ve shared a bed with him, but that in no way led to this recommendation, he will rock it; Bo Burnham – I’ve already booked my ticket; Matt Ewins – If you want something different and a bit out there, then go see this man; Nick Helm – In my experience of Edinburgh, every year involves a Nick Helm show, its one hell of an experience, sheer adulterated joy.

SF: Apart from your show, are you doing anything else for the Fringe?
TT: I might go swimming, and probably check out the new Partridge film…..oh and I reckon I’ll gig as much as I can.

SF: Obviously the Edinburgh Fringe is your favourite comedy festival, but what other festivals do you enjoy?
TT: Leicester is very cool, I like the city a lot and the venues are great.

Catch Tom Toal every night of the Edinburgh Festival at the Comedy Reserve alongside previous Punchline performer John Hastings. http://www.edfringe.com/whats-on/comedy/comedy-reserve

My blog all about comedy. View more posts

One thought on “Edinburgh Festival 2013 preview: an interview with Tom Toal”